HELLO, INTERNET. I'm currently being swamped by a tidal wave of creative juices, so here I am to share a bit of info on those things! No, you don't have to thank me; all part of the service. 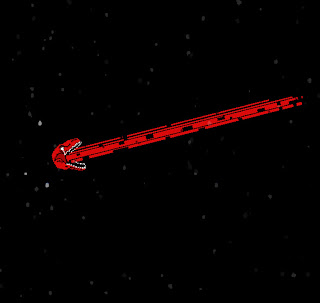 A few months ago, I started teaching myself how to code video games using GAMEMAKER. I made a start on quite a few ideas/prototypes, but when my external hard drive crashed it took a bunch of my game files with it. SAD FACE. So this last week I got back on that particular horse and have been working on SPACE REX 2 (pictured above) and THE END (pictured below). 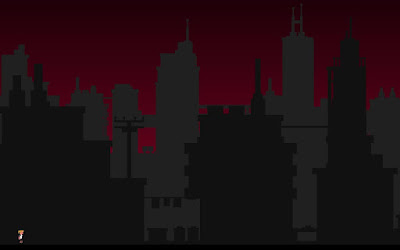 The former has you controlling a disembodied tyrannosaur bonce unleashing cosmic energy roars in order to obliterate asteroids. Rex is mad, you see, since a gigantic space rock destroyed his friends, family and well, entire species. Help him get his revenge! But watch out for the cosmic horrors hiding/controlling some of the asteroids, oh noooooooooooooooo!

The latter sees a lass trying to make it across a city during an invasion by inter-dimensional horrors. When she sees them, she goes nuts and explode-mutates into one! It'll be peppered with little chunks of (semi-random) flavour-text-as-encounters, because why not.

You can keep up-to-date with such things HERE.

I'm also working on what might be another novel, this time featuring the return of my favourite character/creation, private investigator Jack Green. I wrote a ton of stuff featuring him and his exploits uncovering eldritch terrors, but never made them widely available (even though they've been read by quite a few people by this point), so I'm seriously considering dipping my toes into the murky waters of self-publishing. I figure a bunch of my writer chums do well this way, so why not give it a go? His adventures actually pave the way for a whole bunch of stories I have had published, so they'd tie a load of things together, which (all modesty aside) I reckon would be pretty cool.

I'm also still in the process of trying to find a home for my apocalyptic sci-fi/horror/doomed love/metaphysical/Greek tragedy redux novel, which, when I put it like that, probably explains why I haven't found a home for it yet. COMPLEXITY!

And last but not least, I'm also working on some new music, like THIS! -->